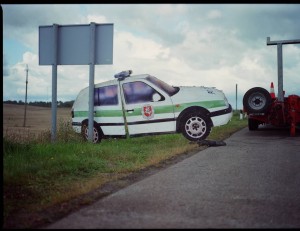 This is the second-largest long-term photographic project by Mindaugas Kavaliauskas, consisting of pictures taken all across Lithuania from 2001 until present.

It used to be said decades ago that Lithuania was an agricultural country. Today Lithuania is often described as country of beer & basketball.

But there is almost no talk about a very special phenomenon, the recent cult of CAR, that started to emerge since 1990. “AUTO -Portraits & -Landscapes” is a work about the automotive culture, a very important side of Lithuanian lifestyle, identity and economy.

Since the restitution of Lithuania’s Independence in 1990, the car has become an additional boost of personal freedom, a source of inspiration and risk, inseparable attribute for work and leisure.

Today, Lithuania is distinctive by its high number of cars per capita, by the scope of inter-continental business of used cars re-sale, by the scale of car servicing, sales of spare parts and other car-related businesses, that can hardly be noticed in neighbouring countries.

Cars imported into Lithuania from all over Western / Southern / Nordic Europe and USA are in fast rotation. They can be sold to locals, to people from the Baltic states, Belarus, Poland, Russia or those from more remote lands, such as Kazakhstan, Turkmenistan, etc. Imagine, that a car previously driven in Spain could end up “living” further in Kirghistan…

After the fall of communism, Lithuanians have swept away the outdated Soviet cars and replaced them with western-made vehicles. In the 1990s, the German cars were ruling the market and minds of people, with Audi & Volkswagen on the top charts of “the Lithuanian Dream”. The dream has been altering ever since. Beyond its function of utility, in the 2000s, the car has been perceived as one of most important personal attributes of self-expression and style.